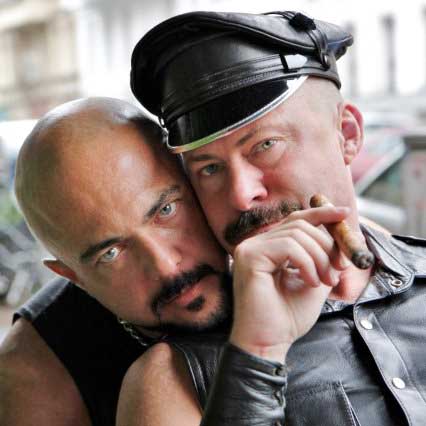 Sir Dart’s interest in leather and BDSM play can be traced as far back as his early childhood years, citing a huge fascination with what was being done to Robin on the Batman television seriesÖand to the furry cowboys on Gunsmoke. When other boys were caught with porn magazines under their bedsÖDart was caught with a roll of duct tape. Since then he has developed an immense passion for rope bondage, not to mention the men he likes to tie up with it. Dart began his leather journey as a collared boy and gradually developed into the dominant he is today. He believes in the importance of ìbalanceî when exploring oneís dominant and submissive side in play, and that great benefit can come from experiencing both elements. Sir Dartís kinky interests in addition to rope bondage include puppy play and training, chest and gut punching, and most recently, fire play. He sees himself as “proudly New Guard” because what is most important is not what happened in the past but what is happening NOW.  His husband Sir Bart came into his life 3 years ago, and the two have since married and share their life together.    Among the events that Dart and Bart have presented at are Thunder in the Mountains in Denver, Beyond Vanilla in Dallas, Leather Pride Toronto, GEAR Ireland,  The Amsterdam Kink Academy, and most recently, Fetish Pride Italy in Rome.  They currently reside in Virgina Beach.